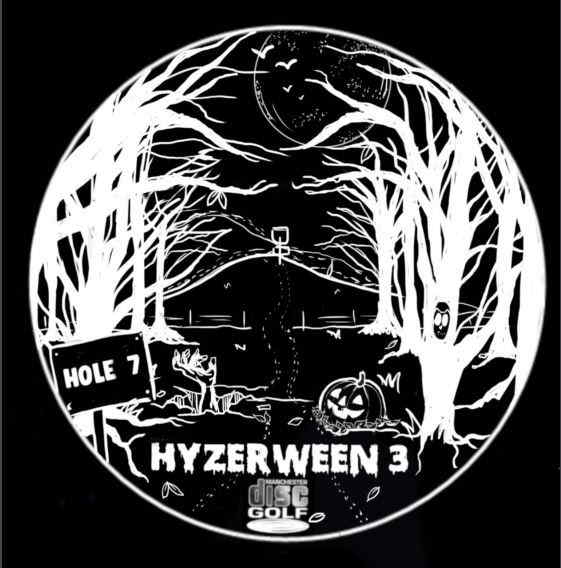 Brought to you by Manchester Disc Golf

Come and join us for a friendly, welcoming and entertaining weekend of disc golf.

“The Nightmare” will be played on the normal layout of our Longford Park course and will cost £40 per person. The event is completely non-profit and we aim to spend every pound on the tournament experience and the prize packages.

Lunch will be included both days, and for dinner we will meet at a Font in Chorlton, (which won't be included in the tournament entry fee hence the £10 reduction from last year). Menus and dietary questionnaire for lunch to follow. The Scout Hut has been confirmed as headquarters and possible lodging for a small group.

We are also putting together a nice player’s pack, with two discs, a t-shirt, mini, MDG iron-on patch and other Halloween goodies.

This will be a fun-focused BDGA points / PDGA rated C-tier tournament - there are divisions to match all levels of play including beginners. The format is stroke play 3-round event with a final "Black Nine" Finals. If that doesn't mean anything to you then you probably should enter one of the divisions marked with a * but you're very welcome to this tournament regardless and we can advise which division is best for you!

We will offer the following divisions;

If this is your first tournament, haven't been playing very long or don't have a PDGA rating (850 rating is approximately a round of 60 at Longford Park), you probably should enter one of the divisions marked with a *

Any questions can be directed to Iain McDougall at irmcdougall@yahoo.com.

Where your entry fees are going:

All are per player and can change with more entrants:

More info to follow such as local accommodation options.

We need volunteers to help us raise money, design, build and maintain the course, and run events for beginners. If you'd like to help, or you're just interested in keeping up to date with the latest developments and events please subscribe to our Newsletter , join our Facebook group, or send an email to info@manchesterdiscgolf.co.uk.